The core components of the Yocto Project are:

BitBake is the task executor and scheduler used by the OpenEmbedded build system to build images. BitBake is a generic task execution engine that allows shell and Python tasks to be run efficiently and in parallel while working within complex inter-task dependency constraints. BitBake stores the output of each task in a directory, the shared state cache. Its location is controlled by the SSTATE_DIR variable. This cache is use to speed up compilation.

Bitbake executes all the layers starting with a prefix ‘meta’.

Note: build-<machine> (e.g. build-oem-platform) – This is the object/build directory, all objects and intermediate files for all components are stored in this folder. if you want to do a clean build you can delete this folder, then run ./meta-cmf/setup-environment and rebuild. The build will be very fast since it will reuse the sstate (prebuilts) during this build, assuming the sstate-cache directory was populated with previous builds already.

Bitbake parses the build classes, config files, and recipes. For every task, a shell script on-the-fly is created and executed.

Recipes are essentially a set of instructions for building packages. A recipe describes where you get source code and which patches to apply. Recipes describe dependencies for libraries or for other recipes, and they also contain configuration and compilation options. Recipes contain the logical unit of execution, the software to build, the images to build, and use the .bb file extension.

The recipes are parsed by the BitBake build engine. The format of a recipe file name is <package-name>_<version>.bb

Patches can be applied to recipe files. Patch files should be having extension *.patch. Place the patch file in subdirectory of recipe named (component) folder.  The subdirectory should be preferably named as that of component or as ‘files’. Add the below line to the recipe file

By default, the OpenEmbedded build system uses the Build Directory when building source code. The build process involves fetching the source files, unpacking them, and then patching them if necessary before the build takes place.

It will be difficult for a developer to do a code walk through since the entire source code is spread across multiple directories. You might want to build software from source files that are external to and thus outside of the OpenEmbedded build system.For example

You want the recipe’s SRC_URI variable to point to the external directory and use it as is, not copy it. Yocto provides a solution to this by its external SRC support. By this all the components will be pulled to a single place. Say, you are component owner and only focused to modify source code of that component and build it alone. Modify the files under ../../<Project Folder> /generic/iarmbus (as an example; you can modify any component like this)

bitbake iarmbus (as an example; you can build any component like this)

To build from software that comes from an external source, all you need to do is inherit the externalsrc class and then set the EXTERNALSRC variable to point to your external source code.

The statements to put in your local.conf file are illustrated below:

By default, externalsrc.bbclass builds the source code in a directory separate from the external source directory as specified by EXTERNALSRC. If you need to have the source built in the same directory in which it resides, or some other nominated directory, you can set EXTERNALSRC_BUILD to point to that directory:

To know the components building from external SRC, see the content of the file ../../< Project Folder> /build-qemux86mc/conf/auto.conf (In case of emulator) 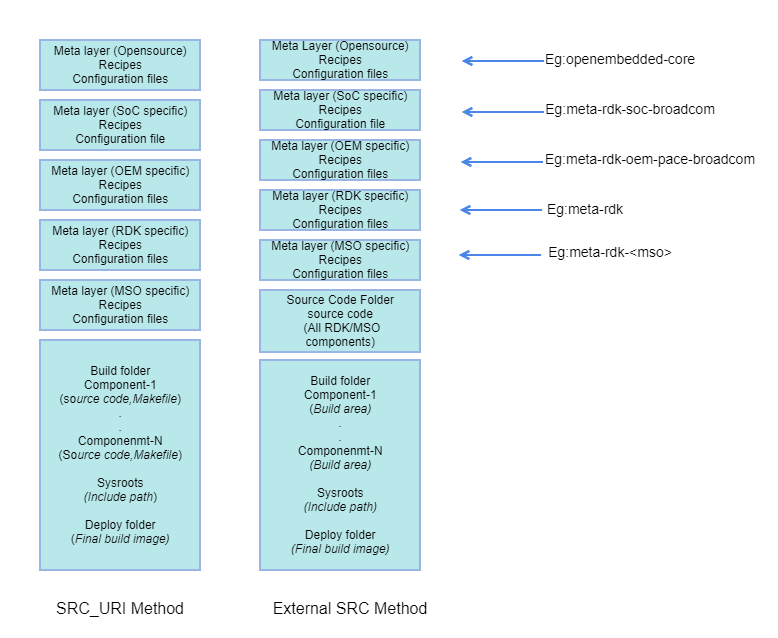 Previous
Build
Next
How to Build

This website uses cookies to improve your experience while you navigate through the website. Out of these, the cookies that are categorized as necessary are stored on your browser as they are essential for the working of basic functionalities of the website. We also use third-party cookies that help us analyze and understand how you use this website. These cookies will be stored in your browser only with your consent. You also have the option to opt-out of these cookies. But opting out of some of these cookies may affect your browsing experience.
Necessary Always Enabled
Necessary cookies are absolutely essential for the website to function properly. This category only includes cookies that ensures basic functionalities and security features of the website. These cookies do not store any personal information.
Non-necessary
Any cookies that may not be particularly necessary for the website to function and is used specifically to collect user personal data via analytics, ads, other embedded contents are termed as non-necessary cookies. It is mandatory to procure user consent prior to running these cookies on your website.
SAVE & ACCEPT